MARY STAR OF THE SEA 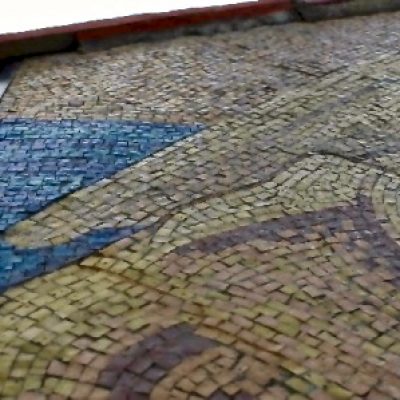 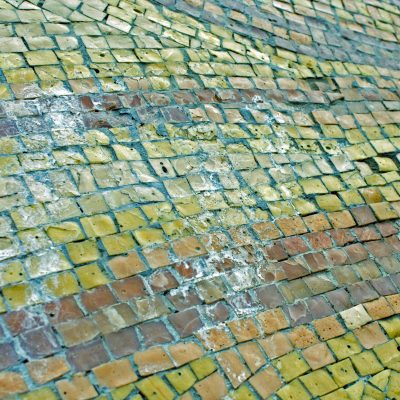 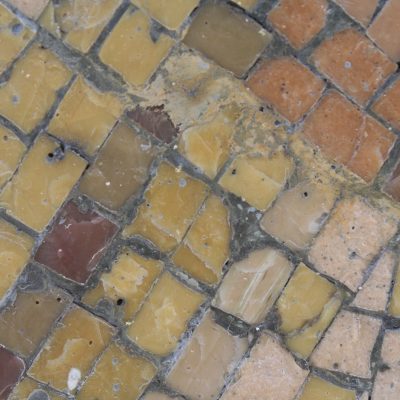 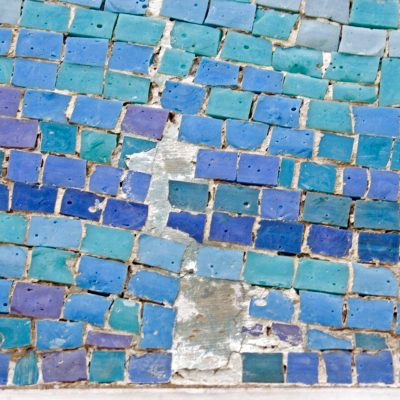 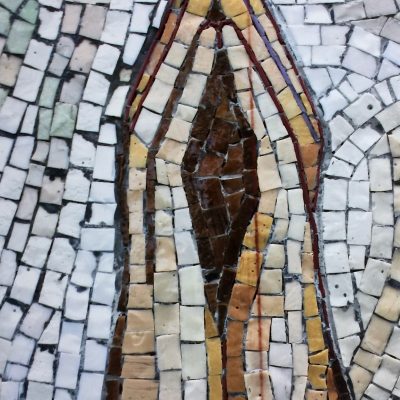 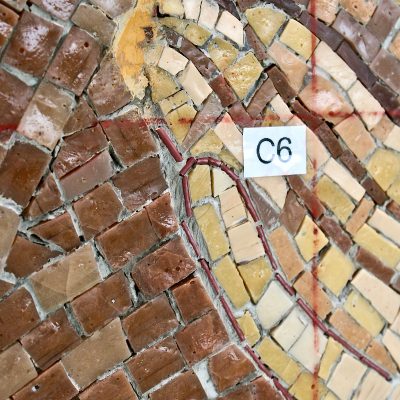 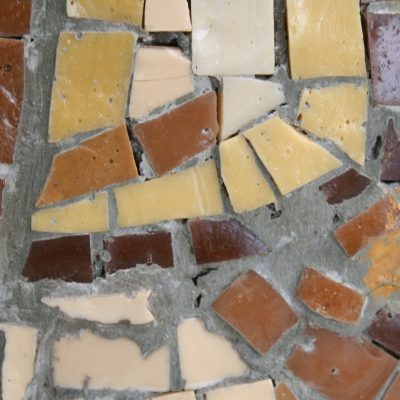 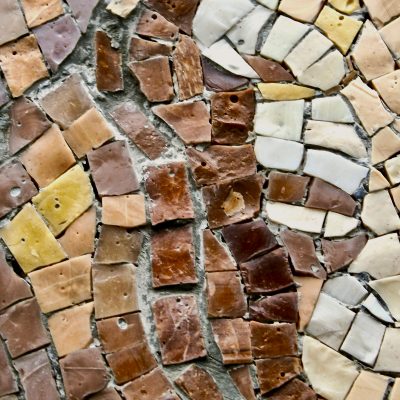 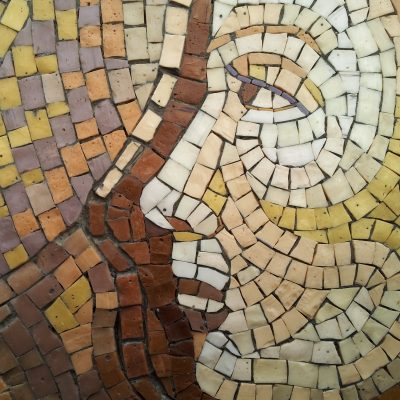 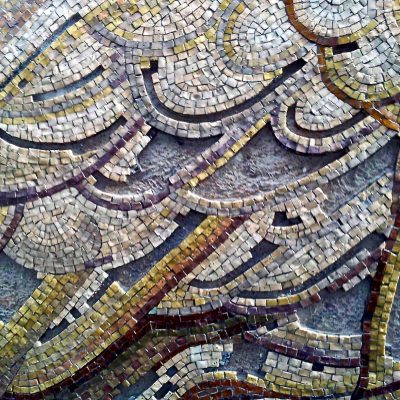 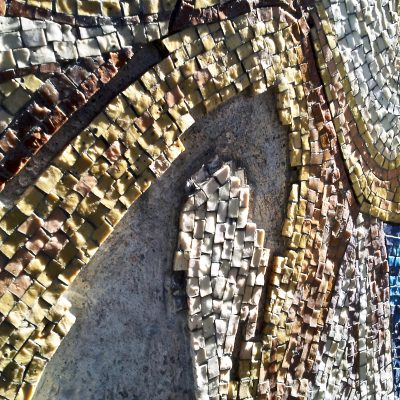 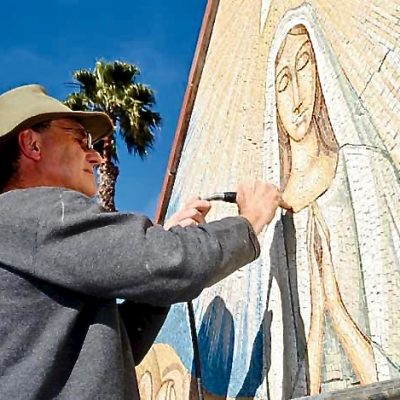 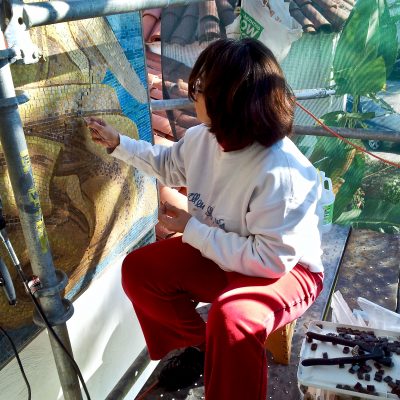 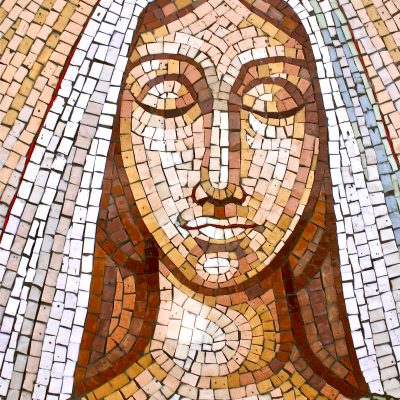 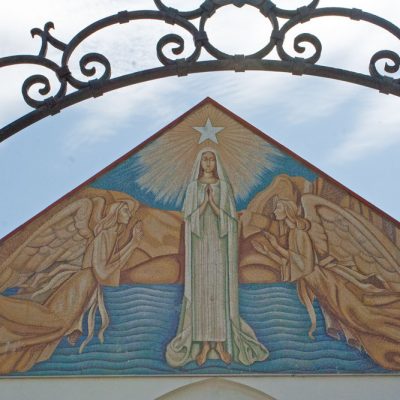 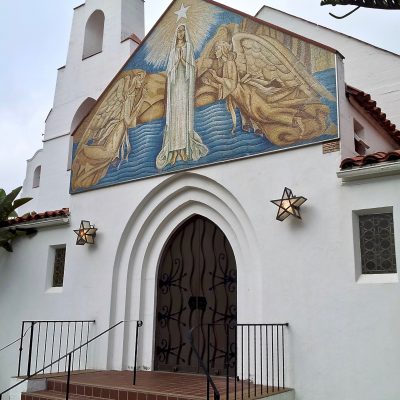 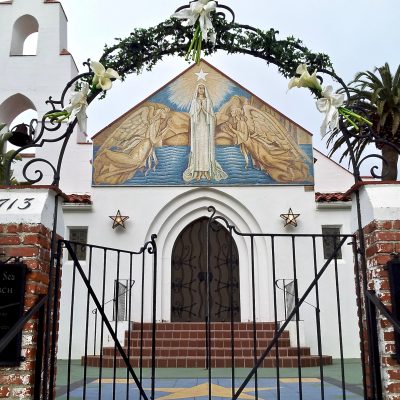 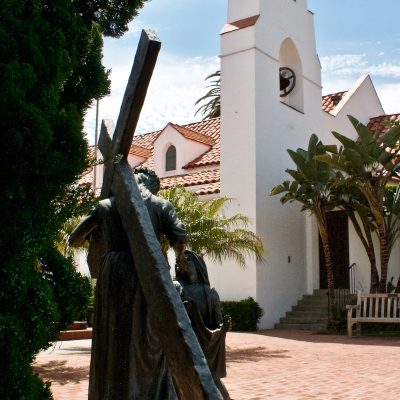 Situated above the main entrance of Mary Star of the Sea Catholic Church, this magniﬁcent wall mosaic represents Virgin Mary ﬂanked by two angels. The entire 140 square feet mosaic was executed with glass mosaics—smalti. Smalto (pl. smalti) is a vitreous glass made up of mixed silica and alkaline substances. The coloring agents added to this basic mix are metal oxides. This mix is melted at high and controlled temperatures. After cooling, the resulting hardened “pancake” or “pizza” is then scarred and cut into fairly rectangular pieces or cubes.

The original smalti for this mosaic were identiﬁed to be made by the Orsoni Mosaici factory from Venice. This family factory has been making mosaics since 1881, and is still producing and selling what is considered the best vitriﬁed glass mosaics in the world. The mosaic was created—in a mosaic studio in Rome—by connecting together relatively small sections of mosaic, like a puzzle. Each section was created by mounting the smalti on a paper support. After all sections were completed, they were shipped to La Jolla and installed on the exterior wall of the church in 1962. Unfortunately, the local tile setters from San Diego did not use the right material (setting mortar) for mounting the mosaic sections on the wall—they used a mortar with a very high content of Portland cement. Due to diﬀerential expansion and contraction, the smalti set on this mortar started to crack and disintegrate. At the time we started the restoration, approximately 1/4 of the entire mosaic material was disintegrated. In addition, inappropriate repairs were performed over the years, using pure cement, thus making the initial bad situation even worse. This repair cement was also used as a grout in almost all areas of the mural surface. The areas with missing smalti were ﬁlled-in and painted over with colored paint, which was an attempt to imitate the missing mosaics. Over time, some of these painted areas had faded thus leaving blotches of unsightly exposed grey cement.

I. INVESTIGATION
Samples of the original setting mortar and original substrate were collected and sent for analysis.

III. CLEANING AND REMOVAL OF CEMENT GROUT, REPAIRS, AND DISINTEGRATED SMALTI
After cleaning, all Portland cement grout as well as the cement repairs were removed by mechanical means. By doing this, we addressed both the technical and aesthetic issues:

• The original undamaged or partially damaged smalti will not continue to crack.

• By removing the grey cement, the aesthetic integrity of the mosaic was restored.

IV. CONSOLIDATION OF LOOSE SMALTI AND REPLACEMENT OF THE DISINTEGRATED SMALTI
In the areas where the original smalti are missing and/or disintegrated, new smalti were set-in using new ones provided by Orsoni Mosaici factory. The colors and shapes of the damaged mosaics were matched. For achieving this goal, photo documentation and full size preparatory drawings were made. The mortar used to set the new replacement smalti was a lime-based setting mortar. Its composition is similar to the setting mortars used in antiquity and in the Byzantine era. This type of setting mortar is now used worldwide for mosaics restoration. The loose original non-damaged mosaics were consolidated using the same material.