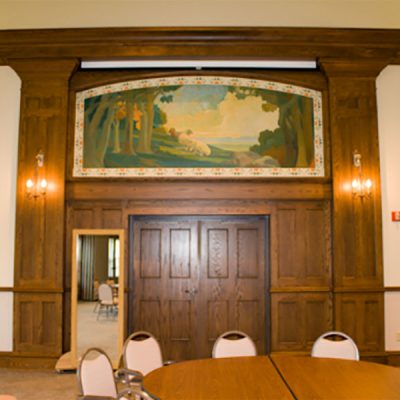 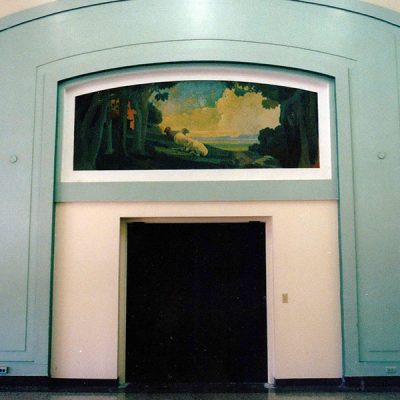 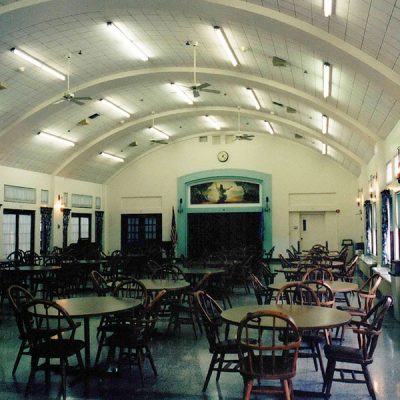 Located in Bloomington, a suburb of Minneapolis, Minnesota Masonic Home, a well designed retirement facility, was built in 1928, on the banks of Minnesota River.

The Landmark Hall is one of the most important spaces in this historic building.

Originally, this space was decorated with stenciled decorative designs—on the ceiling’s arches and on the borders around the murals. At a later date, all these decorated architectural elements were painted over with a light green color. This large elongated space also contains two large oil on canvas murals. They were executed in the artist’s studio and then mounted on two opposite walls, at the far ends of the room, in niches that were especially designed for them. On the east wall is a representation of Jesus, and on the west wall, a pastoral scene painting.

The original wall color, as well as the original designs with their corresponding original colors were discovered under several layers of paint. The overpainted layers were removed, using chemical and mechanical methods. All decorative stenciled designs on arches and borders were replicated. The two canvas murals were restored.

Restoration of the murals consisted of: