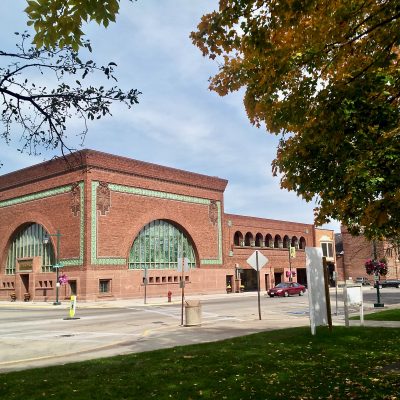 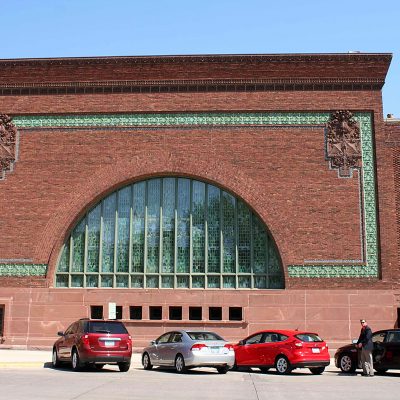 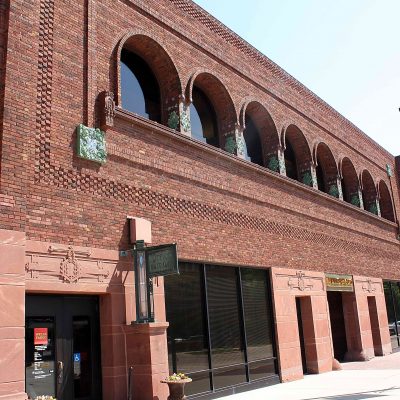 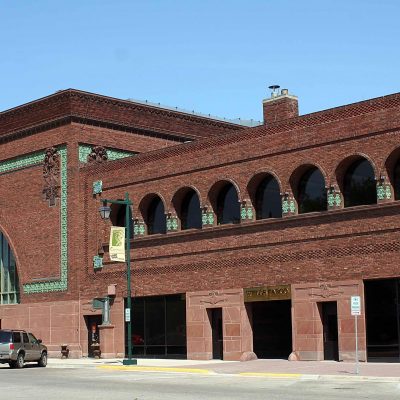 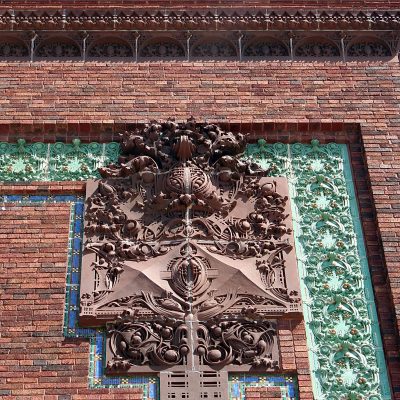 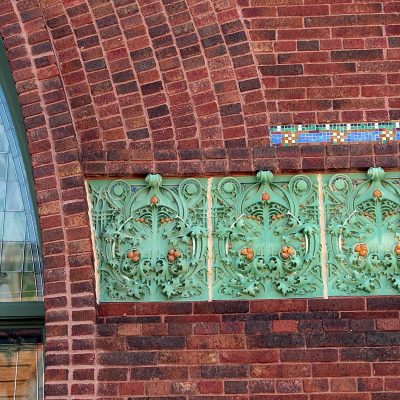 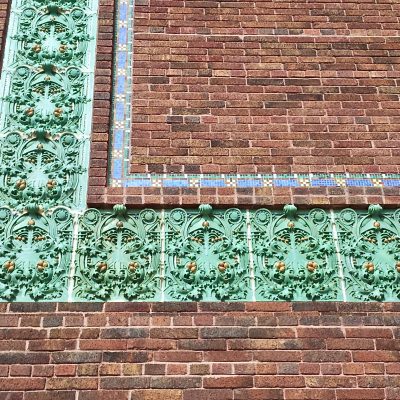 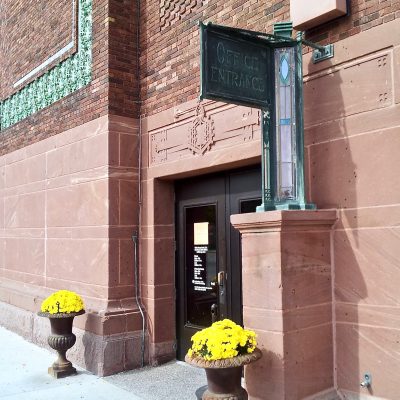 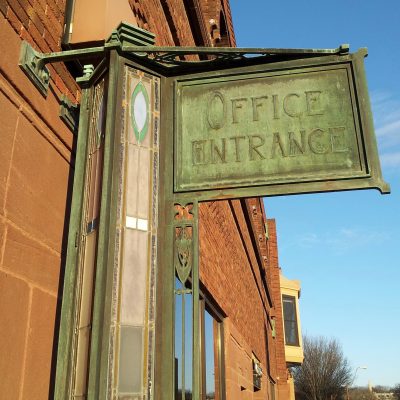 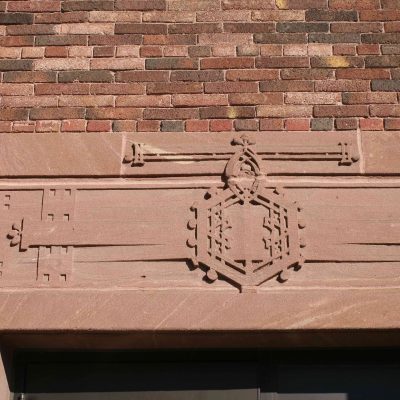 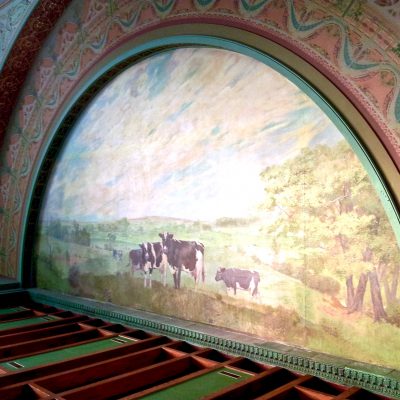 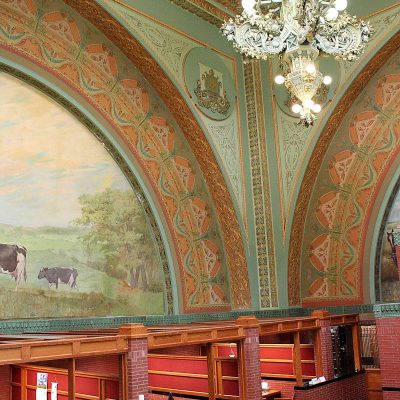 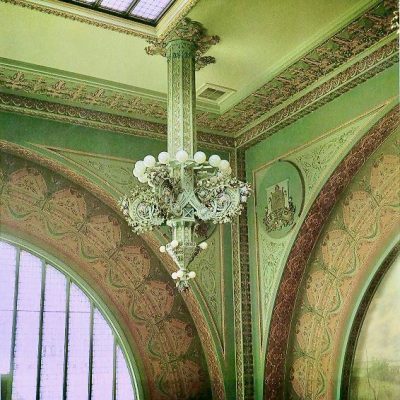 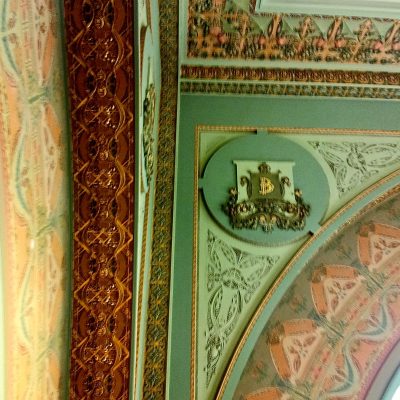 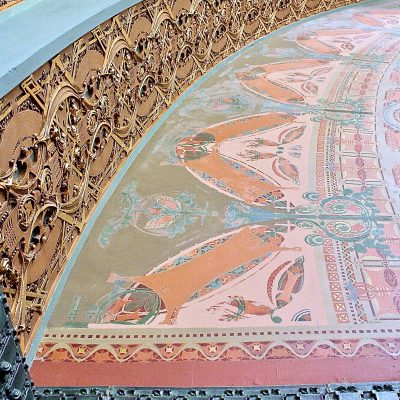 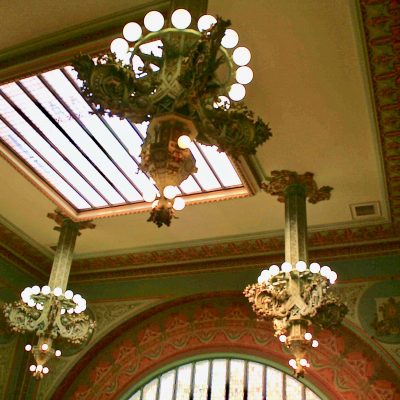 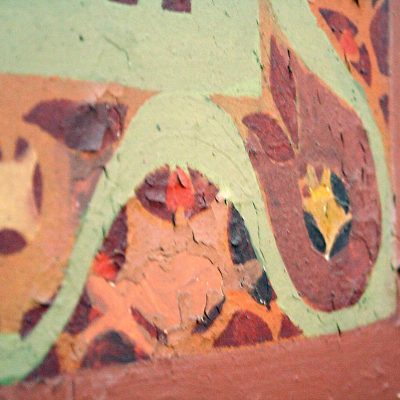 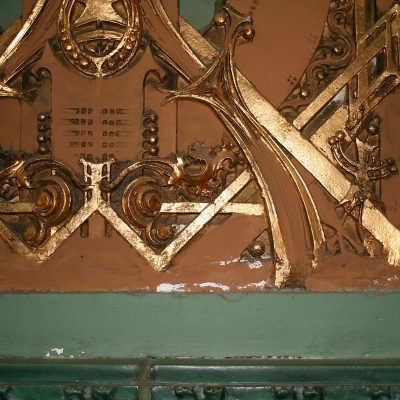 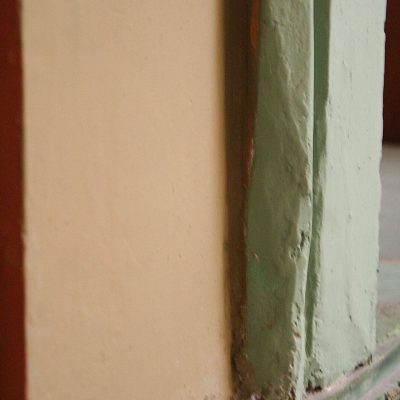 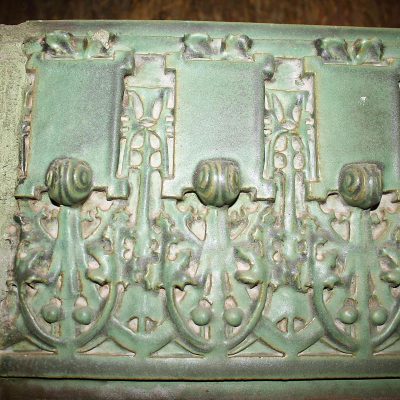 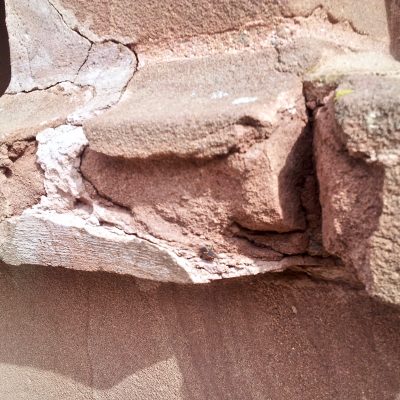 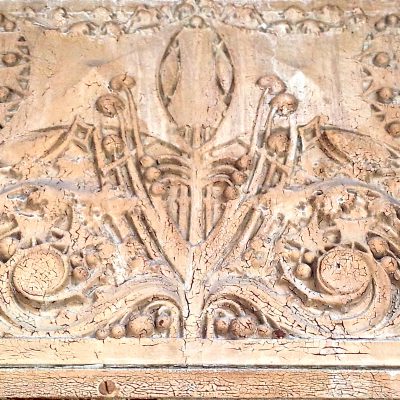 Owatonna Wells Fargo Bank, originally known as National Farmers’ Bank was designed by the famous architect Louis Sullivan and his assistant George Elmslie. For this project, Sullivan assembled a team of highly skilled and inventive Chicago artists and craftsmen. In his book, The Curve of the Arch: The Story of Louis Sullivan’s Owatonna Bank, Larry Millett stated that: “The high quality of the bank’s terra-cotta, cast-iron, and stained-glass ornament testiﬁes to the skill of these craftsmen, who shared Sullivan’s vision of an organic and uniquely American architecture.” The bank (interior and exterior) is adorned with top quality glazed terra-cotta (by American Terra Cotta and Ceramic Company from Chicago), cast-iron ornamentation—the chandeliers, the tellers’ wickets, and other interior and exterior ornamental ironwork (by Winslow Brothers Ornamental Iron Company from Chicago), and ornamental plaster.

The stained glass and all interior painted and polychrome plaster relief decoration of the bank, was designed by Louis J. Millet, Sullivan’s friend from his student days at the Ecole des Baux-Arts in Paris. Like Sullivan, he was a proponent of an organic style of ornament, and played an important role in making known the Arts and Crafts Movement in the United States. Originally, the banking room had sixty diﬀerent kinds of ornament with the most lavish ornamentation designed for the upper walls of the room. On the lower level, the ornament consisted of red brick walls and Craftsman furniture designed by Sullivan and Elmslie.

The exterior, has a base of reddish brown sandstone, further enriched by corner ornaments (cartouches) and a cornice of brown terra cotta. The upper part of the walls is decorated with a special kind of brick, named Oriental or tapestry brick. This brick is made of clays of diﬀerent colors and its face has a rough cut. Sullivan was very fond of this type of brick, and used it along with the other colored architectural elements and décor to create a “color symphony”, “one for the outside and one for the inside” of the bank.

For the interior, Sullivan created a harmonious color scheme and took in consideration the soft ﬁltering eﬀect of the stained glass. A multitude of decorative elements and techniques were used for the ornamentation of the banking room: stencilled décor on walls, painted and gilded plasterwork (especially on the arches intrados), green terra-cotta, the tellers’ wickets, as well as cast iron electroliers and other light ﬁxtures sprayed with green colors/glazes. There are two large murals on the east and north walls of the banking room. They were executed by the well known Austrian born artist, Oskar Gross, in his Chicago studio. The technique used was oil on canvas. After execution the murals were attached to the walls, beneath the arches.

At the exterior of the bank, the most deteriorated elements are the sandstone blocks, which form the base of the bank’s building. Their deterioration is due mainly to acid rain, inﬁltrating water, and the constant use of de-icing salt every winter on the sidewalks surrounding the building. The cracking and disintegration of the stone was further exacerbated by inappropriate previous repairs.

The interior of the bank was also aﬀected by inﬁltrating water. The most aﬀected are the painted and gilded plasterwork elements and the stencilled decoration.

The services provided to the Owner (Owatonna Wells Fargo Bank) by RARA included: investigation, documentation, and recommendations for an accurate restoration of the interior, as well as for the exterior of the bank. Two reports—one for the exterior and one for the interior of the bank—were provided to the management of the bank. Besides the investigation and documentation, these reports included the recommended materials and technologies for the conservation and restoration of all decorated surfaces and architectural elements of this vey important historic monument.